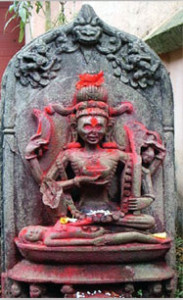 Note:  Specific elements of the Kulachara Tantra Marga practiced at the Kamakhya Temples’ Complex located on the Nilachala Hills are not disclosed to the public, thus only a general overview is given below.

The Kulacara Tantra Marga of Kamakhya has evolved and taken shape as a unique Shakta Tantrika Tradition and is the only surviving Tantra Magra in the world in its purest form. The Kulacara Tantra Marga of Kamakhya which is also called as Yogini Kaula is a complex mixture of Hindu, Buddhists and contribution of practitioners of various streams of Tantrism influenced by indigenous Tibeto-Mongoloid, Austro-Asiatic, Tibeto-Burman, Chino-Tibetian, Dravidian elements for well over a thousand years.

The teachings, rituals and techniques of the Kulacara Tantra Marga of Kamakhya have been very carefully kept as guarded secret by the  initiates till date. The tradition runs through the system of Guru-Shishya Parampara (teacher-student tradition) and most of the knowledge and technique is passed down orally to an initiate by his/her Guru (teacher).

More interestingly, in the Kulacara Tantra Marga there is no discrimination of caste or gender. Any person belonging to any caste and gender can receive initiation from his/her Guru and after going through the process of initiation all caste gets merged into a single stream called initiates (Sadhaka). Every initiate irrespective of their caste and gender gets the right to participate in the rituals taught by the Guru.

Moreover in all the puja / rituals / festivals in the Kamakhya Group of Temples are performed or observed according to the systems prescribed of Kulacara Tantra Marga.